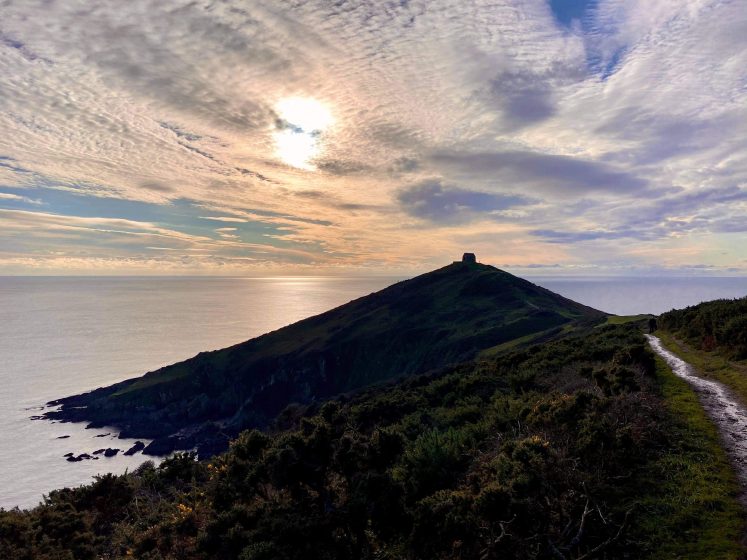 Explore the 800 acres of the Rame Peninsula, located on the South West Coast Path.

Rame Head Chapel (2.0 miles) – A high headland with a bird’s-eye view of the coast for a long way in both directions, Rame Head has long been a lookout point. This is a short loop around the headland, which is a great place for bird-spotting, especially in autumn, when hobbies, merlins, peregrines, hen and marsh harriers and short-eared owls have all been seen passing through. On a day with good visibility you should be able to see Eddystone lighthouse.

Hooe Lake Point & Earls Drive (3.1 miles) – A short stroll downhill to a rocky shoreline dotted with the remnants of fishermen’s cellars and Georgian military defences. The walk starts from Maker Church, with panoramic views over land and sea. The fallow deer grazing among the ancient trees in Mount Edgcumbe’s deer park are descended from the herd introduced at the start of the sixteenth century, and the route returns along the eighteenth-century carriageway known as Earls Drive. Make time for a picnic on the open grassland at Minadhu Brakes, where you can watch the ships go by.

Cremyll Ferry to Kingsand & Cawsand (3.5 miles) – A walk along a very unusual section of the Coast Path, passing mainly through parkland with stunning views across Plymouth Sound and a wealth of historical interest. Children will love to ramble through the grounds of Mount Edgcumbe with its many fascinating features, and will enjoy the beach at Kingsand. This walk is particularly good for dogs as it passes a beach and pubs where dogs are welcome.

Kingsand, Cawsand & Penlee Point (3.6 miles) – A high path over coastal heathland, where butterflies twirl above the wildflowers in the grass beside the path and the breathtaking views out across the English Channel give sight of an assortment of vessels, usually including warships lying at anchor or patrolling the Channel. The walk passes several of the Rame peninsula’s military forts and batteries.

Mount Edgcumbe (4.3 miles) – A breathtaking tour around the waterside perimeter of the Mount Edgcumbe estate, with tremendous views across Plymouth Sound and a host of eighteenth-century follies, fountains, seats and shelters along the path. The route travels through the parkland and woodland of the historic family seat of the Earls of Edgcumbe, who built the house at the heart of the estate in the mid-sixteenth century. The house and its formal gardens, as well as tea-room, restaurant and shop, are open to the public during the summer season.

Tregantle (6.5 miles) – A long loop taking in the best of Cornwall’s ‘forgotten corner’. Features along the way include a tiny medieval market borough with stone crosses and a haunted coaching inn, and one of the ring of ‘Palmerston follies’ built to defend Plymouth during the Napoleonic Wars. Travelling high above Whitsand Bay, the footpaths follow ancient routes and medieval green lanes inland through woodland and heathland, past wetlands full of wildlife.

Cawsand & Polhawn Fort (6.2 miles) – A high walk around the fishtail headlands of the Rame peninsula, from Kingsand on the Plymouth Sound to the delightfully-named Wiggle Cliff above Whitsand Bay. The route, passing some of the extensive Victorian fortifications built on Plymouth’s Western Approaches to protect Plymouth Sound and the Naval Dockyards, will appeal particularly to anyone interested in military history. Look out to sea, on a clear day, to see the Eddystone lighthouse.

Tamar Lake and Headland Chapel (7.3 miles) – This is a very scenic walk, giving views over very contrasting landscapes. These include the major river valley of the Lower Tamar, the city of Plymouth, the mouth of Plymouth Sound and the wide coastal sweep of Whitsand Bay. It also includes the coastal vantage point of Rame Head with a view of the Eddystone lighthouse. A good walk in autumn, when the leaves start to turn in the woodlands and deer can sometimes be seen grazing in the park.

We use cookies on our website to give you the most relevant experience by remembering your preferences and repeat visits. By clicking “Accept All”, you consent to the use of ALL the cookies. However, you may visit "Cookie Settings" to provide a controlled consent.
Cookie SettingsAccept All
Manage consent

This website uses cookies to improve your experience while you navigate through the website. Out of these, the cookies that are categorized as necessary are stored on your browser as they are essential for the working of basic functionalities of the website. We also use third-party cookies that help us analyze and understand how you use this website. These cookies will be stored in your browser only with your consent. You also have the option to opt-out of these cookies. But opting out of some of these cookies may affect your browsing experience.
Necessary Always Enabled
Necessary cookies are absolutely essential for the website to function properly. These cookies ensure basic functionalities and security features of the website, anonymously.
Functional
Functional cookies help to perform certain functionalities like sharing the content of the website on social media platforms, collect feedbacks, and other third-party features.
Performance
Performance cookies are used to understand and analyze the key performance indexes of the website which helps in delivering a better user experience for the visitors.
Analytics
Analytical cookies are used to understand how visitors interact with the website. These cookies help provide information on metrics the number of visitors, bounce rate, traffic source, etc.
Advertisement
Advertisement cookies are used to provide visitors with relevant ads and marketing campaigns. These cookies track visitors across websites and collect information to provide customized ads.
Others
Other uncategorized cookies are those that are being analyzed and have not been classified into a category as yet.
SAVE & ACCEPT